Our first Spirit Sirens Showcase, where we celebrate women in the food and beverage industry! Today we are interviewing Megan Campbell.  Look for more Here! 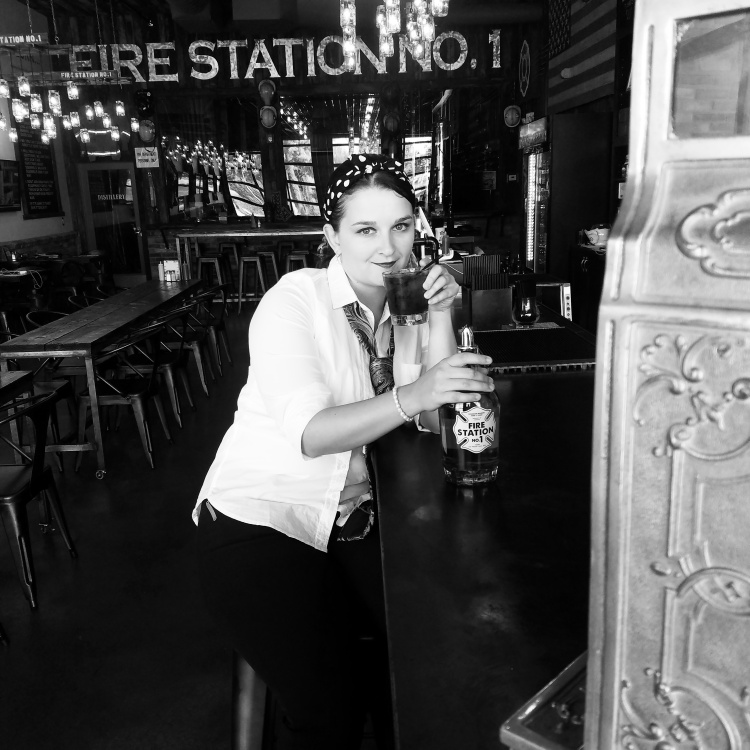 Where do you work currently and what do you do?

I work at Fire Station No.1 in Old Town Peoria, home of Lucidi Distilling Co.  I am a bartender and mixologist there, I’m responsible for creating most of the items on our cocktail menu and I look forward to redesigning it now that we are expanding our whiskey selection and getting in some must-have liquors and cordials.  Myself and my coworkers also recently made our own moonshine, all the way from grain to glass.  I’ve been looking forward to that opportunity for a long time, it was great to finally get a hands on experience with distilling.

Studio Movie Grill! This is where I got my start in the food and beverage industry.  It was a great foot in the door and as much as my wallet hated it, those long weekday mornings with 1 or 2 customers were instrumental in my ability to research and fall in love with the craft cocktail and spirit world.

How long have you been in the industry?

I started in January of 2014 so by years I’m still a baby in the industry..  It was one of the reasons my resume for Lucidi had to be so unusual… A regular resume would never get me a good job in a bar! I was barely qualified to be a bar back at a really great cocktail bar.  Don’t tell the people that hired me though!

What do you mean your resume was unusual?

Well the resume I created was in two parts… one listing my actual experience, along with the stuff I had done at home like creating my own syrups and all the research I had done.  The second was a menu that I created from scratch, since my goal was eventually to be responsible for the cocktail menu wherever I ended up.  I used local spirits, homemade syrups and infusions and fresh ingredients to create about 10 different drinks.  Then I made the drinks, photographed them and designed the menu.  I had it printed and laminated at kinkos for like $3, it was great.  I still have it!

When did you first start feeling like your career would be in the Food and Beverage industry?

I would have to say it was a few months after I had dropped out of the education program at ASU.  I was really worried about stagnating without college to drive me so I really threw myself into the world of cocktails, just so that I would be learning something and bettering myself.  After I had read about 2 or 3 books and was watching videos all day and thinking about drinks and food all the time for like, 3 months, I realized that the food and beverage industry wasn’t this dead-end place where dreams go to die like I had always imagined when I was younger.  I started to realize how much passion and talent it takes to be really good at this job and that was a big turning point for me.  It wasn’t until about a year later that I started to think maybe I really could make a career out of this and be happier than if I followed the ‘right path’ that I had set for myself.

I think my favorite ‘first’ story is about the dream I had the day before my first shift.  In it I arrived to work late (naturally) and then my whole family showed up like 5 minutes into my morning shift asking for drinks.  Someone had already gotten the liquor cart out of the back for me which was nice, but (in the dream) I couldn’t remember where the cooler was and I needed the rest of my supplies.  Well, it turns out the walk in cooler was behind the giraffe enclosure (remember, I work in a movie theater.  No giraffes) and it was hidden in this rock facade.

At this point my manager was yelling at me that everything was late and customers were waiting and I didn’t have what it takes to be a bartender, etc. etc.  I was so upset, but I finally found the right rock and I opened it up and there’s a Yetti right behind the door.  He lets out this huge roar and I’m just like “NO.  I CANNOT DEAL WITH THIS! YOU NEED TO LEAVE!” and scared the yetti away with the sheer force of my frustration.  I was seriously stressed out when I woke up, but at least I knew that my first day couldn’t be as bad as that… especially since the walk in cooler was literally right next to the bar and there is no way you can forget where it was.

Any times you felt like being a woman was a detriment or worked against you?

I would never say that being a woman has been a detriment, especially in an industry where people get hired and paid more based on their looks.  I will say that people generally have to learn that I’m knowledgable.  They never expect me to be able to answer their questions as well as I can when it comes to liquor, especially whiskey.  I can’t even tell you how many times I’ve had people ask me if I know the difference between Scotch and Bourbon, it gets so old so fast.  Sometimes I want to work it into my greeting, like “Hi, I’m Megan, I’ll be your server today and no, I’m not a blithering idiots so don’t treat me like one.”  I think if I were a guy with a big beard and a flannel shirt I wouldn’t have that problem.

Any “Scary” moments? Times when you felt uneasy because of a customer? Or coworker?

I can’t say that I personally have had a lot of those moments, I’ve been very lucky in that respect.  Usually if there is someone at the bar who is giving off a bad vibe, there is someone else there who knows me and will stay until that person leaves.  That’s happened a couple times for sure.  I’m not sure I can say the same for coworkers though…

The last place I worked, there was a lot of tension between the kitchen staff and the servers.  There were nights when I absolutely would not go in the back because one of the older guys in the kitchen would always ask if I had a husband or a boyfriend and then see if I wanted drugs too.  It was really uncomfortable and I know he did it to all the girls who went back there.  To me, he was one of the biggest catalysts in realizing that our male coworkers have no idea how bad it can be sometimes.  Any time one of us girls mentioned that kitchen guy, all of our male serving friends would say they had never seen anything like that and he ‘really wasn’t bad at all’.  It just blew my mind that all the girls that worked there had the exact same experience and were still marginalized.

Can you tell us about any Customers that really stand out to you? Regulars or one off’s?

By far the customer that stands out the most in my mind is one of our regulars at the Fire Station, Alan.  Alan was one of the first people that came in when I started working at the distillery and he was the first person I ever had that I would call a ‘Regular’.  I knew other bartenders had them, but since I was pretty shy and new to bartending, I figured that was just a thing for other bartenders.  It kind of opened my eyes a lot when I started getting regulars and realizing that they were coming back because they wanted to talk to me more.

The other customer/s that really stand out to me, even now are other peoples regulars.  Like, that look of disappointment when they come in and see you behind the bar instead of the person they were looking for… I just have to apologize every time haha.  It’s not so bad at the Fire Station, but at Studio there was one bartender that would over-pour really bad for his regulars and give them free popcorn and stuff like that.  It always put me in a really uncomfortable position of telling someone that I’m not going to give them free stuff for no reason.  It took about three or four months after that guy left before I finally stopped having his regulars ask for ‘extra’.

Share with us a moment of pride for you, a time when you really accomplished something in the industry or at your job.

At Lucidi, we only have the 4 liquors that we make, we have about 20 types of syrup and we have 5 different fruits and vegetables.  When I left Studio, it was because I felt limited there and I wanted more liquors and cordials to work with.  When I started at Lucidi, it was because I knew that if I needed those liquors, I would have to make them myself.  Being able to create a menu under such incredibly limited circumstances, and one that satisfies real cocktail lovers and people in the industry, was a huge step for me.

Being so basic, I was forced to really look at the spirits I was using and how to bring out their characteristics instead of just memorizing cocktails that already existed.  It also forced me to nail down the basics when it comes to balancing cocktails.  Something Dale Degroff once said was that beginner bartenders want to throw six or seven ingredients into every drink and just keep adding until it tastes good, instead of starting with a good foundation.  I was certainly on that path and creating that cocktail menu showed me the value of a really good foundation.

What is your dream job? What do you really want your career to be?

I guess what I’m really doing is trying to figure out how I can get people to pay me to do whatever I want all the time haha.  What I really want is sort of a mash up of four or five different jobs, I think.  Eventually, I want to be in charge of the cocktail program when my boss expands their cocktail options.  I’d like to do consulting/education for other bars.  I think my dream is to be able to host tastings and educational events at specialty bars.  For example, a vodka bar would have me come in to guide their staff through the different types of vodka and the history of it so that they can be better equipped to help their customers.  I want to do the special events at Lucidi, the weddings, the big business events, the holiday celebrations, that kind of thing.  I’m a total sucker for planning events, I get that from my mom.

Also, obviously, I want my blog to… maybe not take off, but I’d really like to get a few hundred views on the average post.  I love to write and it would be really gratifying to know that people read what I write.  Oh, yeah, and I want to keep distilling, naturally.  I absolutely loved being able to do that with Mariah and Kayla and Chris and I look forward to doing that many, many more times. 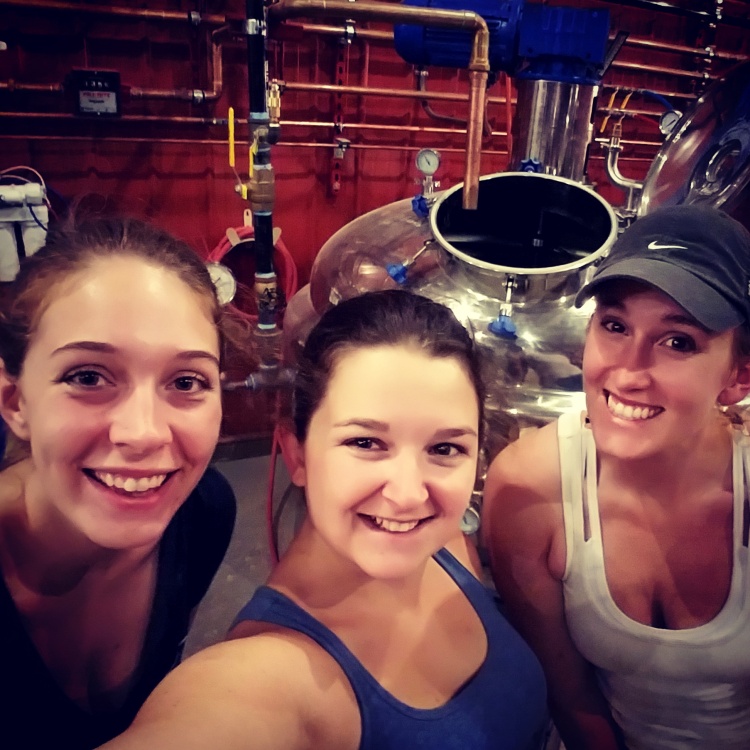